I have two sons:  Andrew is 24, and Rob is 21.  Andrew graduated from Barrington High School in 2010, and happily accepted High Point University’s offer of admission and a Presidential Scholarship.  What he didn’t accept, at least at first, was our insistence that he attend HPU’s Summer Experience, a sort-of boot camp for incoming freshmen.  Eventually he acquiesced and accepted his fate.  He would spend one month during the summer taking two classes, adjusting to dorm life, and making friends.  In hindsight, he thanked us for insisting that he do this, but at the time, he was resigned rather than excited.

Andrew and I arrived in High Point, NC and moved him into his dorm, met his summer roommate, and took a trip to Target to buy the essentials we hadn’t packed.  When all that was done, with a bit of false cheer and bravado, he suddenly turned, hugged me, and said “oh, mama – I don’t know what to do next.”  This from my unbelievably cheerful, effervescent, friendly son, who has never met a stranger, only a buddy he doesn’t know yet.  When Andrew was under one we said he would someday be either a politician or a game show host – he was that outgoing.  The honorary mayor of Barrington at five.  But faced with being left in a strange place, knowing no one, he had a moment of panic.  I said, “look – the guys across the hall have a big screen TV with the World Cup Soccer on, and their door is open.  That’s an invitation.  You go, introduce yourself, and watch a little bit.  I’ll wait here.”  He said, “no, you have to go.  I’ll be okay.”  And we both took a deep breath, and we went out, he to the boys across the hall, me to my car. 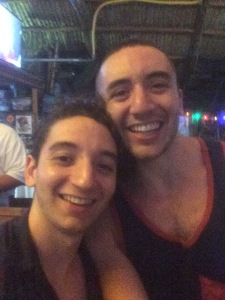 When I got to my car, I realized I had left my car keys in Andrew’s room.  I didn’t want to cramp his inchoate style, so I went to the Student Center across the parking lot, bought a coffee, sat in the sun while I drank it, and THEN went back up to Andrew’s room.  When he saw me in the hall, he broke from his new little posse and said, “what are you DOING here?  GO!!!”  So I went.  I got my keys, got in the car, and drove the 269 miles to my hotel for the night.  And I wept, not so much that I couldn’t safely drive, but for at least 100 of those miles.  I wept for the young man who made an effort to not need me anymore, for the anxiety we both felt, and for the end of my hands-on parenting of this remarkable man.

Three years later, and it was time to send Rob off to college.  Rob graduated from BHS in 2013.  He applied to one college, Tulane University, was accepted, and won a whopping full tuition scholarship.  In August 2013, Chuck and I drove one car, while Rob and Andrew drove the other, to High Point, to move Andrew back into his campus apartment.  He shared this for three of his four years with two of his original freshmen year roommates, one of whom he bonded with during Summer Experience.  From there, Chuck, Rob, and I continued down I-85 toward Atlanta and on to New Orleans, to move Rob into HIS Summer Experience, called NOLA week, at Tulane.  We were told that Rob could have one suitcase and one duffle bag, and nothing more, for that first week, so we dropped him at Tulane and drove away, but stayed in New Orleans for the week with the rest of his belongings.  Chuck saw clients and worked while I wandered the city, visiting museums and restaurants and galleries, but had almost no contact with Rob.  On Move-In Day, we returned to Tulane, unpacked the rest of Rob’s belongings from the Pilot, and settled him in to his room.  Unlike Andrew, Rob had not met his college besties during the pre-orientation week, but he met them on that move-in day.  He shooed us away, and we headed for Rhode Island.  In the car, somewhere in Georgia, Fleetwood Mac’s “Landslide” came on the radio.  “I’ve been afraid of changing, ’cause I’ve built my life around you.”  I started to sob, to grieve, to shriek.  I had built my life around my children.  I had no aspirations beyond growing good men.  Now that they were launched, who was I?  Who am I now, if no longer full time mama?  I was bereft, panicked, mourning.

I cried off and on for about a week.  And then life went on.  Luna the shepherd-poodle and I spent a lot of time together, and I missed the companionship and sounds of my sons and their friends in my house.  I missed Rob’s piano, the soundtrack of my daily life.  I didn’t miss the endless dirty dishes and boxer shorts left laying about.  I missed the laughs.

It’s been another three years since we became empty-nesters, and the first in seven years that we haven’t had a road trip south to set up someone’s dorm or apartment and make someone’s bed.  This adds another layer to the syndrome – what we lost in emptying our nest we mildly replaced with summer move-in rituals, now gone.  Our men are where they are going, at least for now.

This weekend Andrew was home to participate in a friend’s wedding.  I took him to the airport Sunday afternoon, and I cried on the way home.  Every time my boys leave I feel a shadow of that empty-nest grief.  I love them, and I applaud their independence – after all, wasn’t that the goal of our parenting, to raise men who could leave and thrive without us?  I am more at peace than I was with my new role – although I’m not sure what that is.  I have no idea what comes next, and that’s usually okay.

But when they leave, I cry a little bit.

Use about four slices of cheese per sandwich.  Spread soft butter on one side of the bread, then place on a cold griddle.  Turn heat to medium, and leave it alone until toasty and brown, about 7 minutes.  Spread butter on the top of the sandwich, then flip.  Cook another 7 minutes or so.  Remove to a plate, cut on the diagonal, and eat.

I washed it down with a Gold Rush:

Shake all ingredients over ice, and strain into a martini glass. 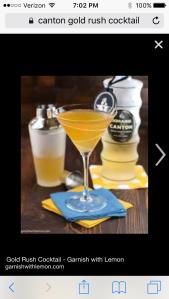 Widget is a silly word